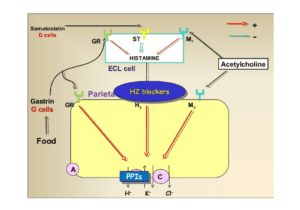 In the last several years acid reflux, or GERD has become an increasingly prevalent health condition. As a result, typical acid reducing medications such as proton pump inhibitors (PPI’s) and histamine blockers (H2 blockers) are literally flying off the pharmacist shelf!

And while this is the mainstay approach among well-meaning conventional physicians, taking these medications long-term are not without consequence. Once your body depends on them, they can be quite difficult to get away from.

You see, while sensible at first glance based on the intended effect (i.e. down the road to reduce stomach acid), acid lowering medications can and do cause a number of downstream health issues over the course of months and years such as nutritional deficiencies, mood changes, digestive complaints, and fatigue. Not only this, a good portion of the time, they actually ignore the underlying cause of the condition in the first place. 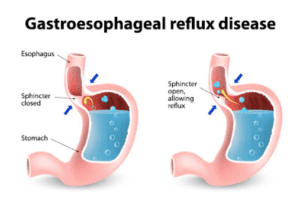 In many instances, contrary to popular belief, acid reflux is not due to high amounts of stomach acid, but actually a “rebound effect” from too little stomach acid at the start of a meal.

As a refresher on this topic please take note of the following explanation from our article on the impact of the “Chronic Stress Response and Adrenal Exhaustion”.

If you eat a meal without enough baseline stomach acid, or digestive fire, to begin with, the food literally just sits there until the system decides to release acid over the food, from the so-called “cardiac region” of the stomach (i.e. near the heart and consequently near the esophagus).

What happens next it that the acid released on top of full stomach contents inappropriately refluxes into the esophagus causing a number of uncomfortable symptoms such as burning, burping, and throat irritation.

The key to successful treatment is to identify what the trigger is to appropriately help restore balance, and for many of our patients, that trigger is a chronic reduction of baseline stomach acid (especially in patients 50+), histamine abnormalities related to methylation, habituation due to chronic use and misuse of acid reducing medications, or even missed anatomical abnormalities of the upper GI tract that should have been diagnosed years ago.

Our bodies have intricate feedback mechanisms that help modulate how much acid is secreted and inhibited.  Acid secretion is influenced positively by Acetylcholine (Ach), Gastrin Releasing Peptide (GRP), histamine, and gastrin.  Somatostatin inhibits acid release once the ideal pH of the stomach is reached. There is no doubt that PPI’s or H2 blockers can be quite helpful in the short term for symptomatic relief. However, many patients end up using them for longer periods of time. This then starts a vicious cycle of the body trying to overcompensate for the medically suppressed acid. Any attempt to discontinue these medications after such habituation then leads to a rebound effect of hypersecretion of acid since it is no longer being suppressed, thus causing a return of symptoms and further justification for the prescribing doctor to continue giving the medication. Frustrating, right?

Problem #3: Acid and an Acidic pH to the upper GI tract

Acid plays a critical role in helping us digest our food at an optimal pH around 3. Acid allows us to appropriately absorb the nutritional elements from the food we eat by acting as a pH regulating mechanism for the activation of our own digestive enzymes. Thus, suppressing acid in the long-term effectively decreases the bio availability of nutrients, inadequate breakdown of protein, and provides too much undigested substrate for bacteria and other pathogens to feed on downstream in the small intestine. It is therefore one of the key correlates to a phenomenon known as SIBO (Small Intestinal Bacterial Overgrowth.

Obviously, this combination of vitamin, mineral, and protein deficiencies down the line can lead to a multitude of symptoms such as, but not limited to, mood issues, neuropathy, fatigue, mental fog, etc. In addition, the resulting bacterial imbalance or related pathogen overgrowth can trigger immune mediated problems and lead to abnormal bowel habits once it progresses beyond what the body can handle.

Finally, it needs to be said that stomach acid and more specifically the pH of the small intestine is a natural and direct inhibitor of certain pathogens (such as yeast), certain bacteria, and parasites, that prefer to thrive in a low acid environment. So, the chronic intake of acid reducing medication or an unaddressed low baseline acid level (e.g. as we age), ultimately sets us up for pathogen overgrowth scenarios that can have significant implications in all aspect of our health and quality of life over time. 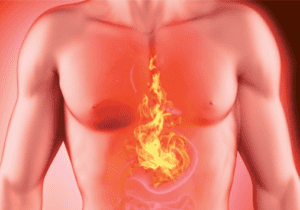 Short-list of triggers/causes of acid reflux that our clinic looks for:

Regardless of the cause, if acid reflux is left untreated, it can lead to long-term damage to the lining of the esophagus causing constant pain and inflammation. In some individuals, especially those with genetic susceptibilities (which we can test for) can lead to Barrett’s esophagus, where the tissue lining the esophagus starts to resemble the tissue lining of the stomach and can even develop into a nasty form of esophageal cancer.

Basically, the symptoms of reflux should not be ignored, but they ALSO should not be treated without understanding the cause and treating the causes directly. While acid inhibiting medications are the “standard of care” they are also wrought with challenges and consequences. That said, NEVER, stop any medications, including acid inhibiting medication such as a PPI or H2 blockers, without your prescribing doctors’ permission.

If you are currently suffering from acid reflux or other digestive problems, our clinic would be happy to assist you with identifying the root cause of your symptoms AND/OR help you successfully and safely come off acid suppressing medication. It is never too late to restore your digestive system back into optimal balance and achieve overall improvement in your health.