Thyroid disorders affect an estimated 20 million of people in the U.S. Many people are not even aware that they have a thyroid problem, since the diagnosis is often missed. Thyroid disorders are considered to be on the rise, likely related to widespread nutrient deficiencies, exposure to environmental toxins, poor gut health, and the increasing prevalence of autoimmunity. Women are also much more likely than men to develop thyroid disorders.

Not only are thyroid disorders often poorly diagnosed, they are often poorly treated. Conventional therapies often fail to address the underlying cause of disease. Even after being placed on thyroid medication for hypothyroidism (underactive thyroid), most commonly Synthroid® (or levothyroxine), many patients will continue to suffer with symptoms.

Their doctors may insist that if their blood levels are “normal” their symptoms can’t possibly be due to their thyroid. In our practice, we take a holistic approach to treating thyroid disorders by searching for the root cause of disease and using natural therapies to regain balance in the thyroid. 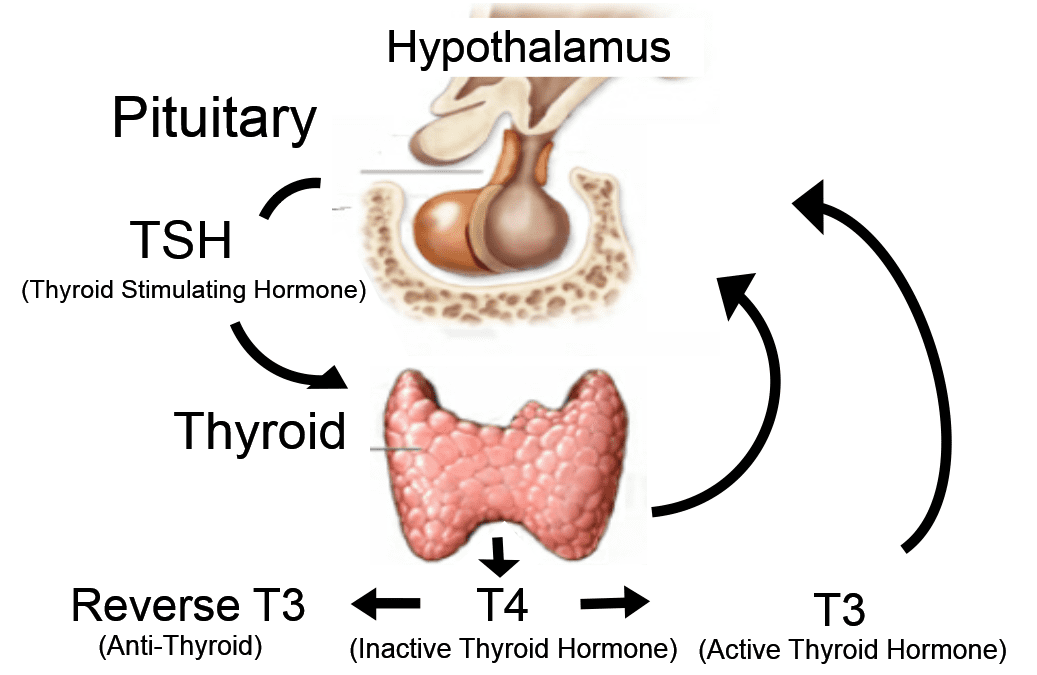 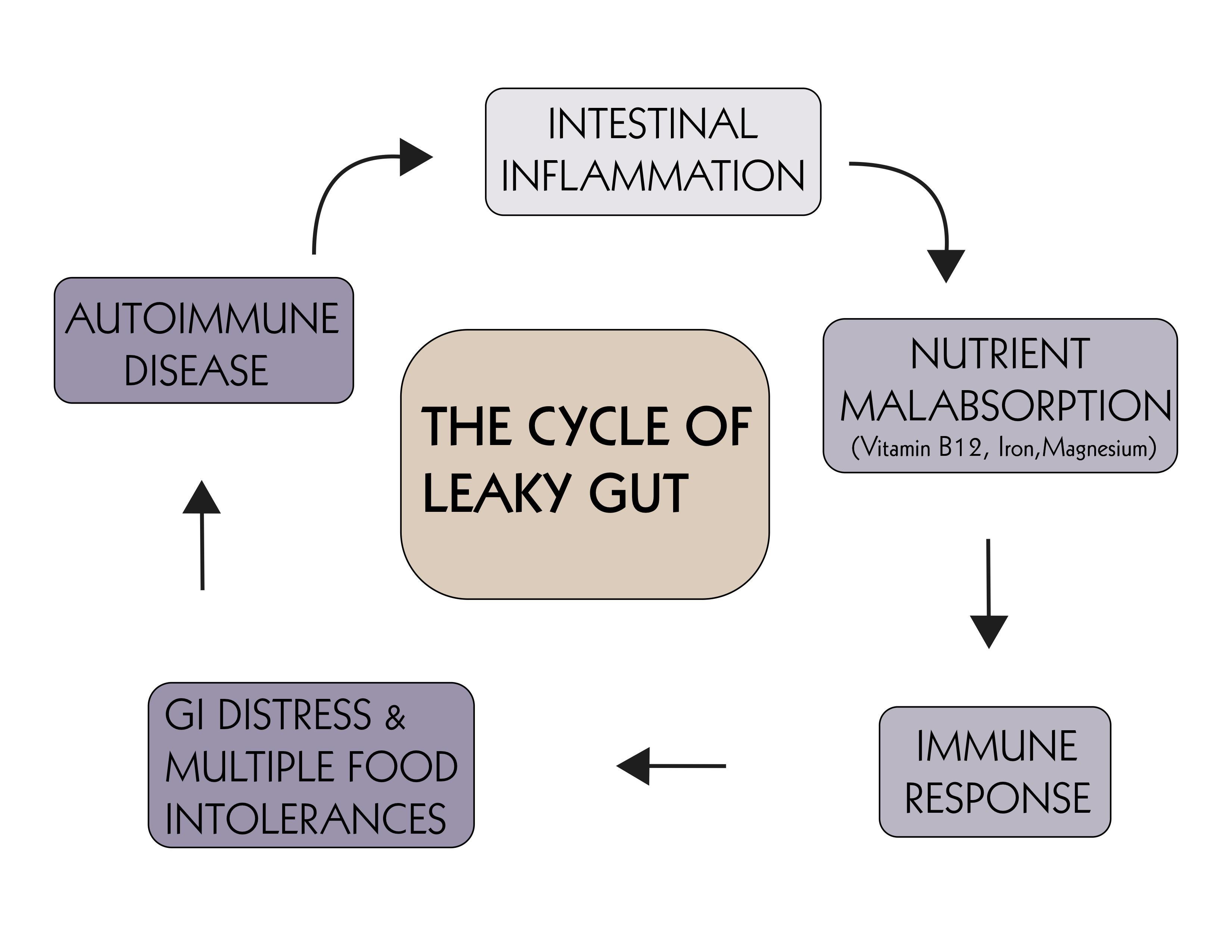 Functions of the Thyroid

So, what exactly is the thyroid? It is a butterfly-shaped gland that sits in the front of the neck and produces hormones that regulate the body’s metabolism. The hormones produced have far-reaching effects that influence every system of the body.

The main thyroid hormones are T3 and T4. T4 is the inactive form of the hormone and T3 is the active form. T4 must be converted to T3 in order to become active.

Hypothyroidism or underactive thyroid symptoms may include:

Hyperthyroid or overactive thyroid symptoms include:

One reason that the diagnosis is often missed is incomplete lab work for thyroid disease. Many doctors will obtain only a TSH blood test, and if the level falls within the “normal” range then the thyroid is considered to be working normally, even though this may not be the case.

This is why we recommend obtaining a complete thyroid panel including TSH, free T3, free T4, reverse T3, and thyroid antibody levels. Of course, it is also important to look at other labs outside of the thyroid panel.

When evaluating the TSH level and other labs, many physicians are looking to see only if it lies within the “normal” range and not necessarily the “optimal” range, which is also part of why many thyroid patients don’t feel “optimal.” Looking at the whole picture, including a patient’s symptoms and lab work, is necessary to accurately make the diagnosis and guide therapy.

The body produces antibodies against your thyroid tissue, as if it were foreign to the body, which leads to gradual destruction of the gland. It can cause hypothyroid symptoms AND hyperthyroid symptoms (thyroid pendulum) at varying times and can be very frustrating for patients.

Hashimoto’s is diagnosed by the presence of elevated antibodies including thyroid peroxidase (TPO) and thyroglobulin (TGB) antibodies. Unfortunately conventional practitioners often fail to look for these antibodies on blood work. Why is this? Because it won’t change their overall treatment, whether you have hypothyroidism vs. hypothyroidism due to Hashimoto’s. But it will certainly change mine! In my opinion, this is a major failure of conventional medicine.

One very likely reason why autoimmune conditions are more and more prevalent is due to a condition known as “leaky gut.” Food sensitivities are a common culprit or association with leaky gut. Certain foods in sensitive individuals can cause damage and inflammation to the absorptive surface of the gut, allowing larger molecules to pass from the gut into the blood stream that would not normally be able to pass.

The flood of these “foreign” molecules kicks the immune system into overdrive, and the body will start attacking its own tissue such as the thyroid gland. Gluten is a particularly common trigger for many people, especially as it pertains to Hashimoto’s.

Other sensitivities include dairy, soy, corn, and eggs, among others, which can be tested with a food sensitivity panel. An important part of recovery is instituting an elimination/anti-inflammatory diet, getting rid of pathogens (if they are present), and repairing the gut in stages.

An autoimmune condition that causes pure hyperthyroidism is known as Grave’s disease. The conventional therapies for this condition include anti-thyroid medications, propylthiouracil and methimazole, radioactive iodine, and surgery.

A functional medicine approach necessarily approaches the same core issues as with Hashimoto’s disease, including leaky gut, toxins, infections, and nutrient deficiencies. In both of these autoimmune conditions, as well as any others that may be identified during a medical workup, it is important to support the immune system, which can be done with select nutraceuticals.

High levels of reverse T3 can also indicate a problem, since this is also an “inactive” form of thyroid hormone that essentially blocks thyroid function. Reverse T3 (RT3) levels can become elevated, especially during times of stress, to conserve energy and lower metabolism. RT3 levels can also be elevated with other problems such as heavy metal toxicity, so they can also be a red flag that there are other (potentially worse) problems lurking elsewhere.

As you can see there is a lot more to thyroid disorders, that when looked at carefully, can lead to better (and more exact) treatment options and/or diagnostic clues.

Iodine is an essential nutrient for the production of thyroid hormones. It is typically obtained through the diet in foods such as fish, sea vegetables, iodized salt, beans, nuts, seeds, and certain vegetables.

One reason that hypothyroidism is so widespread is related to deficiencies in this key nutrient. Not only are we not taking in enough iodine in our diet, other elements including fluoride, chlorine, and bromine compete with iodine in the body and can displace iodine from the thyroid gland. Chlorine and fluoride are often found in the water supply, and bromine in flour and bread products.

Not only is iodine important for thyroid function, it is critical for breast and ovarian health. Iodine deficiency can play a key role in the progression of both hypothyroidism and hyperthyroidism, and it is important to restore the levels of this nutrient, if needed, based on testing through an iodine loading test.

Other nutrients are also integral to thyroid function such as selenium, iron, B vitamins, and zinc. Individualized supplementation with nutrient therapy plays an important role in supporting thyroid function.

The hypothalamus, pituitary, and adrenal (HPA) axis, and more specifically the adrenal gland, which regulates the primary stress hormone, cortisol, among others, is also intimately tied to thyroid function.

Deficiencies in cortisol, commonly known as adrenal fatigue (or HPA axis dysfunction), the extreme of which is known as Addison’s disease, has many overlapping symptoms with thyroid disorders.

Very often both the thyroid and HPA axis need to be evaluated and treated in concert to obtain maximum benefit from treatment. In fact, because all hormones impact each other, an imbalance in one hormone often causes an imbalance in another. So it is also important to evaluate the sex hormones (testosterone, estrogen, progesterone, pregnenolone, and DHEA) to see how imbalances in this area might also be impacting the system as a whole.

Dr. Boggess will typically use a combination of saliva, blood, and urine to get the most complete picture of the thyroid, adrenal, and sex hormones in any patient presenting with a primary complaint related to thyroid illnesses of any kind.

If supplementation with thyroid hormone is needed, patients often have a good result using natural or bioidentical forms of thyroid, which we commonly use in our practice. This is typically derived from animal thyroid and therefore contains all the hormones your own thyroid would naturally produce, including T4 and T3.

Other times, we can use a compounded version of thyroid replacement, which still contains a combination of T4 and T3, and is free of animal products. Still others may need a different approach.

Therapy is guided by a patient’s response, including improvement of symptoms, as well as following lab tests. It is our philosophy that each thyroid patient is unique and therefore should be treated based on individualized needs. Our goal is to help thyroid patients regain their vitality by working together to address all aspects of thyroid health in a very precise way.

Learn about our precision medicine and functional medicine approaches to treating thyroid disorders and other medical and mental health conditions.

We Are Here to Help You!

On behalf of the Natural Balance team, we hope you have found this information helpful and we look forward to working with you. Learn about our New Patient Process for thyroid disorders. For a personalized assessment of your thyroid condition and a treatment plan unique to you and your needs, call Natural Balance Wellness Medical Center at (734) 929-2696 or book an appointment online.