What is “Methylation” and why should I care?

First consider how we exist physically?  We exist courtesy of carbon chemistry and its rules which allow us to thrive, grow, and sometimes suffer failures, illness and disease. This fragile microscopic world is built upon combinations of elements forming molecules which in turn form microscopic structures that become cells.  Cells in the aggregate form organs, systems, and ultimately the body in which we get around in every day.

Now, consider a methyl group (a single carbon atom and three hydrogen atoms — CH3) being transferred roughly one billion times per second allowing for millions of chemical reactions ongoing.  This process of methylation (i.e. transferring of a methyl group — CH3) serves innumerable critical functions throughout the entire body.  It is secondary in importance only to water (H2O). This is what methylation is. And studying the methylation cycle, in combination with other biological cycles can provide invaluable clues to assist in recovery from numerous states of disease. 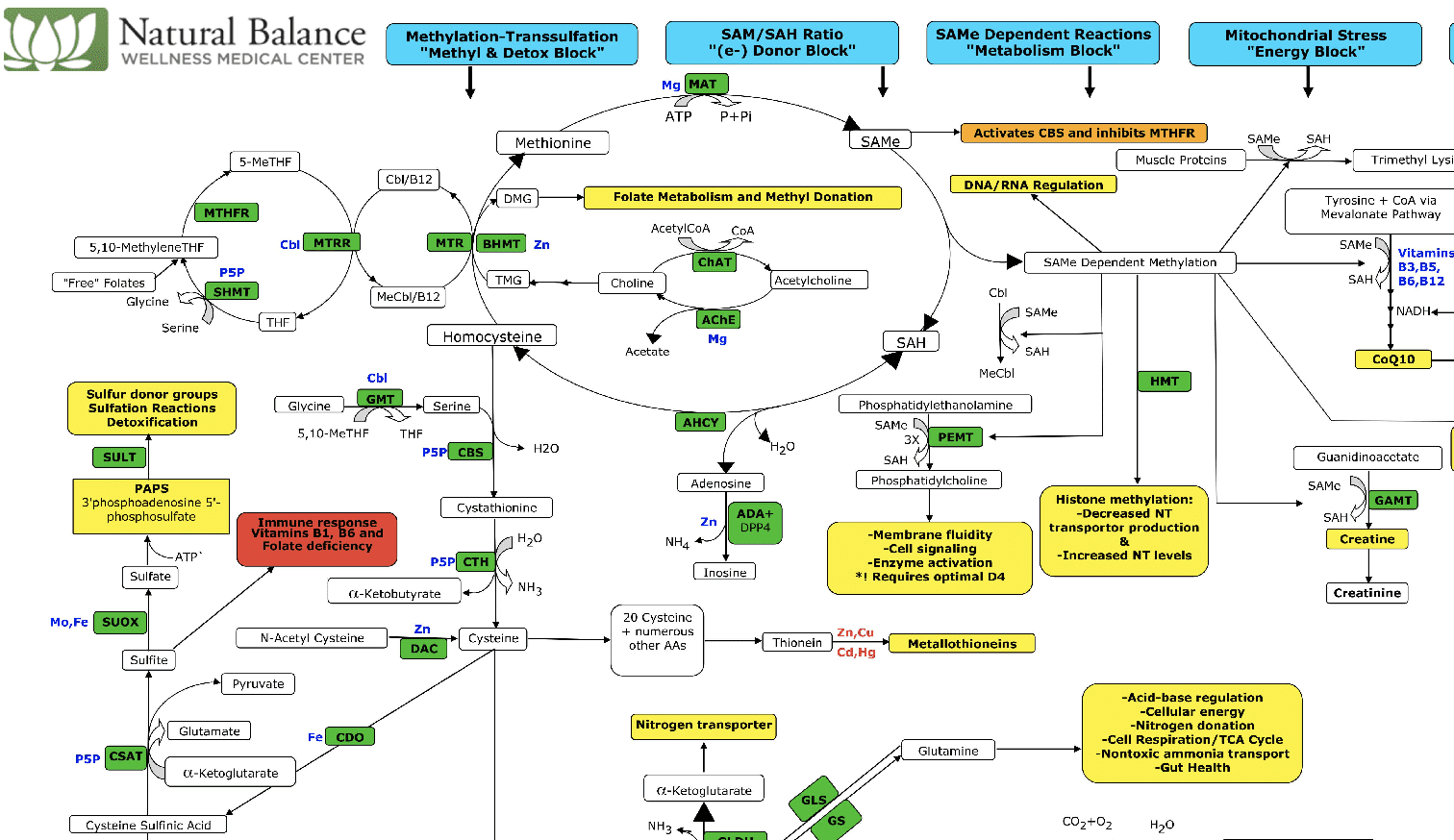 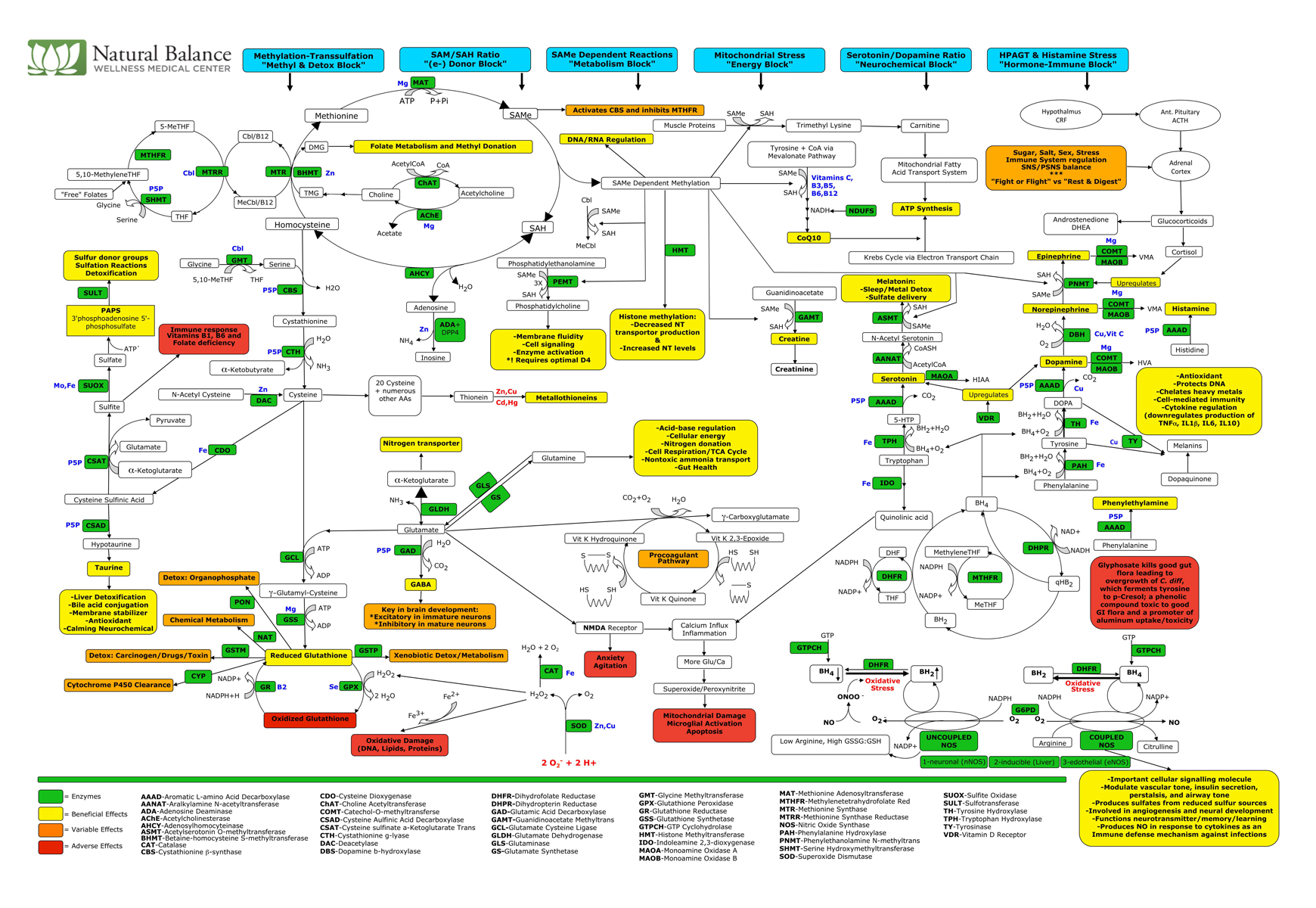 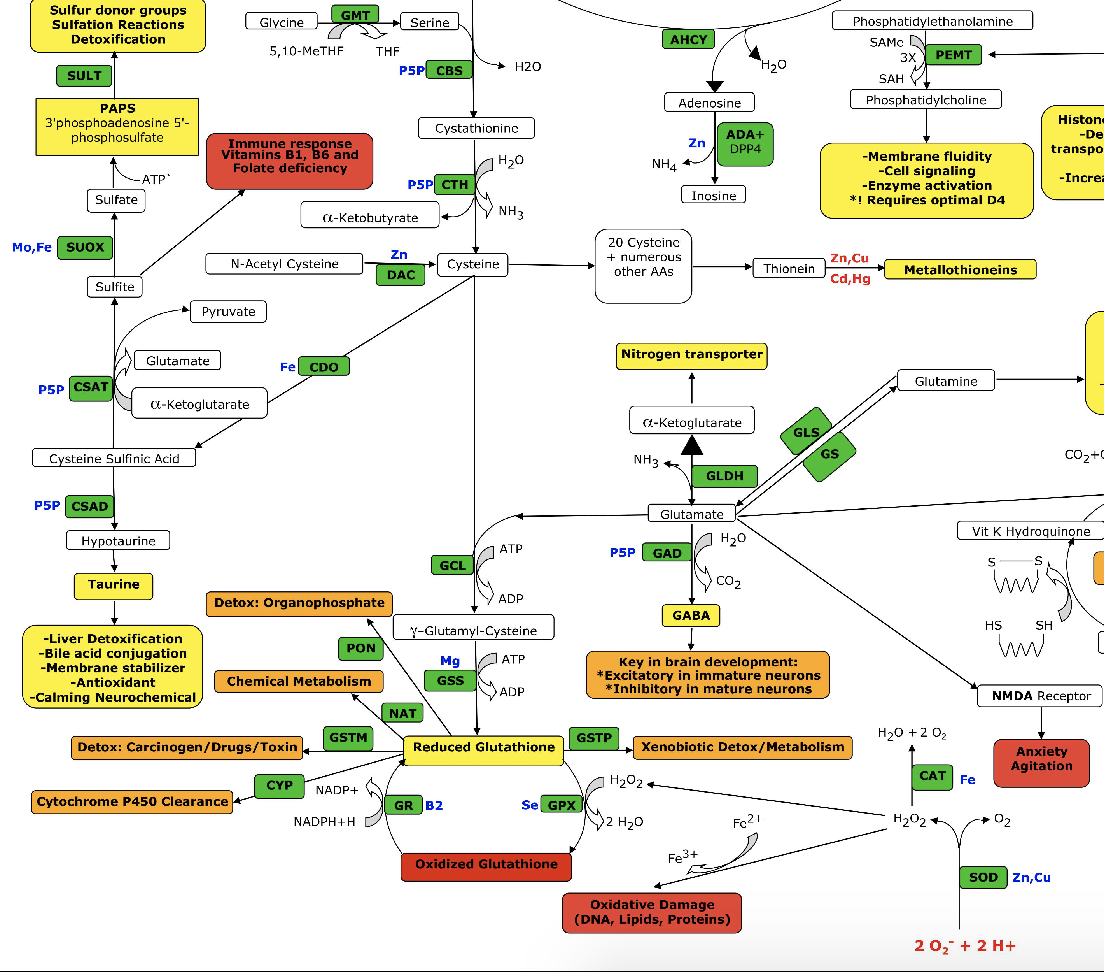 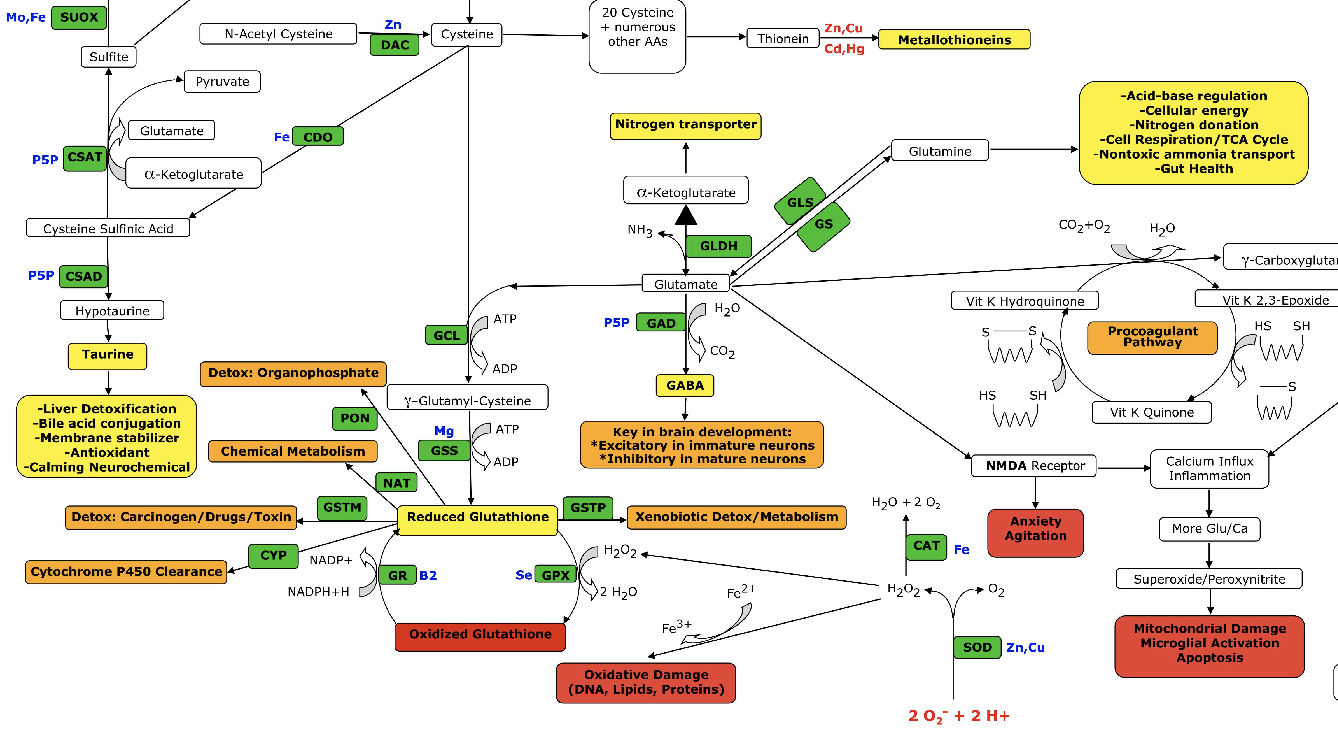 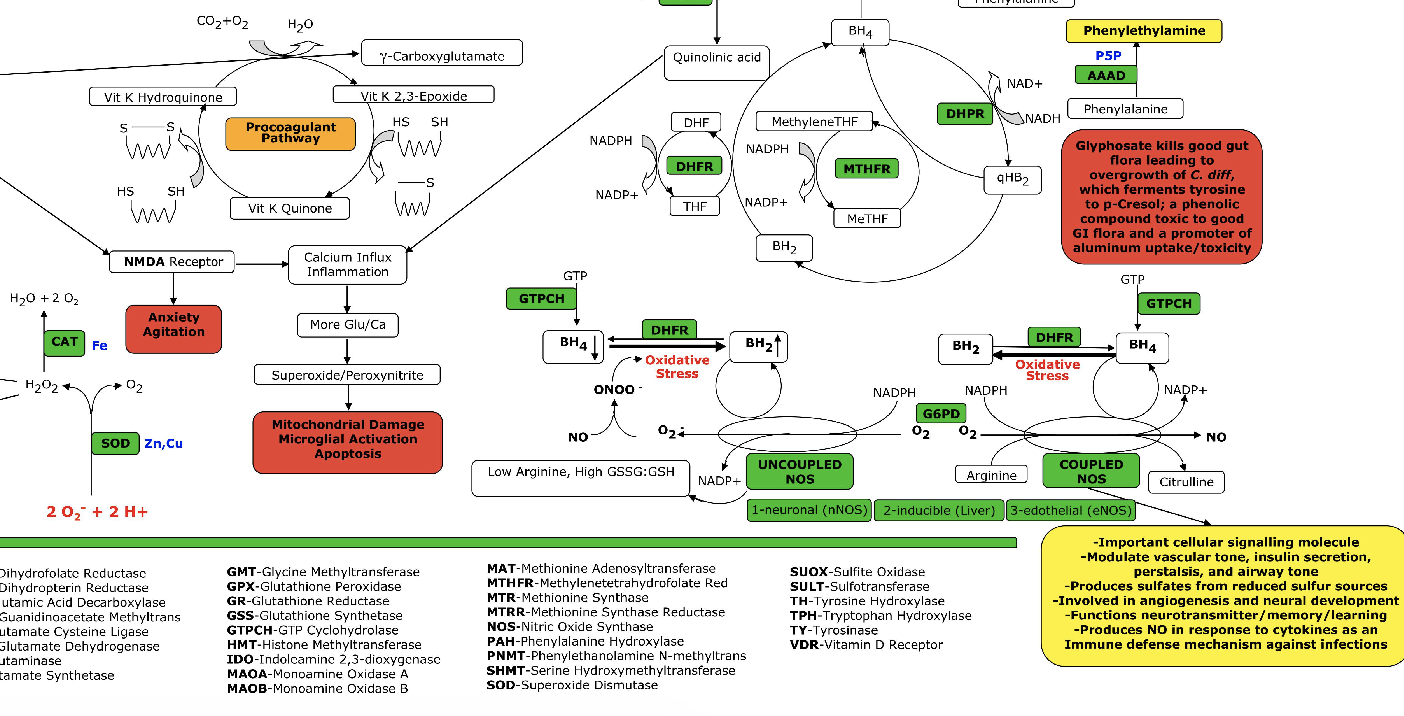 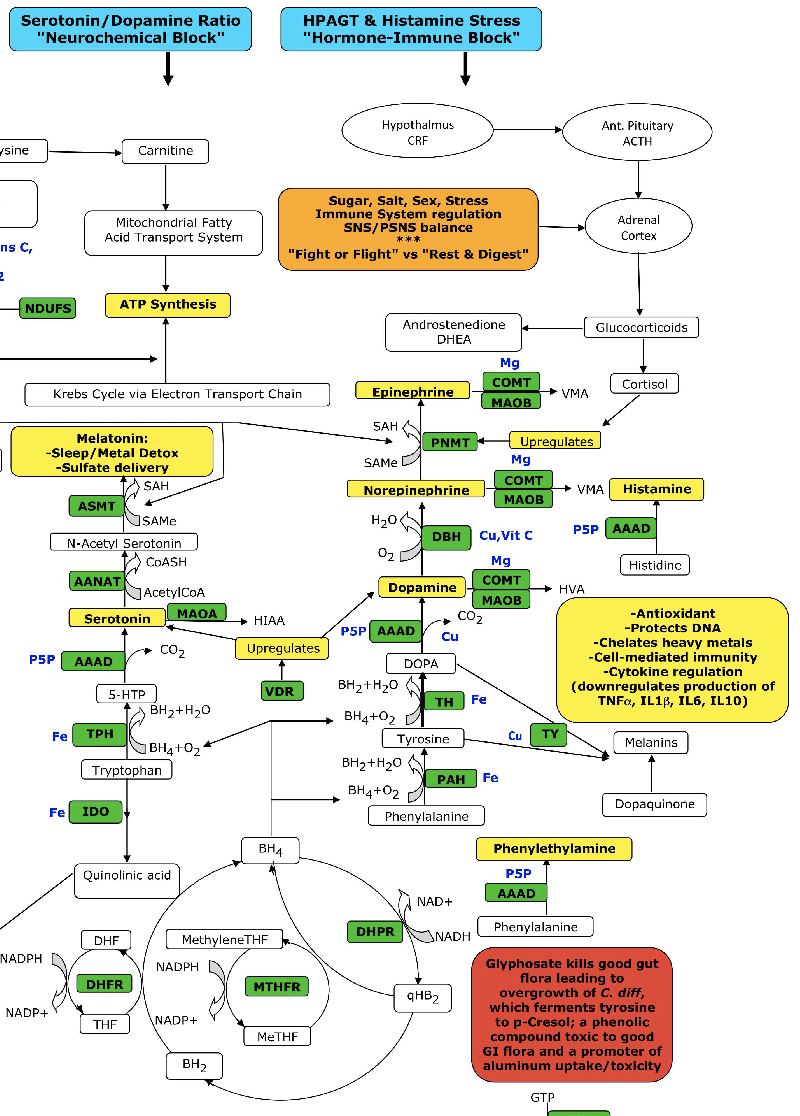 Where do methyl groups come from?

What happens if I don't methylate well?

How does methylation regulation occur?

How does the methylation cycle become impaired?

Methylation plays in important role in many body and disease processes. Learn more below.

Importance of the Methylation Cycle in...

The rising incidence of AD(H)D is almost as frightening as the that of autism. Impaired methylation results in decreased production of dopamine. The altered dopamine levels ultimately lead to altered levels of the other neurotransmitters. As a result, these individuals lack focus, concentration, short-term memory, organization, emotional stability, good sleep hygiene, and hormone regulation.

In addition to impaired methylation leading to imbalanced TH1/TH2 ratio, it can also lead to high histamine levels. This increased humoral response (with higher TH2 than TH1 cells) triggers the activation and recruitment of B cells (which produce IgE antibodies), mast cells, and eosinophils. The cumulative effect is allergic inflammation, often systemic.

Mutations that impair the methylation cycle of infants, when coupled with environmental insults, can lead to devastating neurodevelopmental disorders. One of the diseases now becoming a worldwide epidemic is autism. The CDC just reported that the incidence among boys in the United States is now 1 in 50; the incidence among girls somewhat lower.

Autism is increasing at an alarming rate worldwide. It is projected to hit an incidence of 1 in 10 by 2020. The medical costs associated with such an epidemic will be staggering; the emotional and societal costs even more so.

Global hypomethylation of the entire genome can result in cancer-causing genes remaining activated. Conversely, there are situations where overmethylation of cancer-suppressive genes causes them to remain inactive. Many endogenous products, for example, estrogen, require methylation for inactivation. Clearly, estrogen and other hormone-sensitive cancers are thus more prevalent when poor methylation is present.

Simultaneously, the state that increased the risk of cancer has also led to a state of immune surveillance dysfunction. Therefore, the abnormal cell surface antigens on precancerous cells are less likely to be recognized. This is especially true with regards to NK (natural killer) T cells.

Cell repair requires energy and the raw ingredients needed for RNA to provide the cell with instructions. Impaired methylation leads to a decreased responsiveness of the cell, exactly when it needs it the most when under stress. The nervous system, in particular, has the highest concentration of RNA within the body. Therefore, it has the highest methylation needs.

Just as with cell repair, cell synthesis requires optimal methylation in order to keep up with the demand for nucleotides (DNA/RNA building blocks). The human body must create millions of new cells per minute in order to thrive. Tissues such as bone marrow, neural tissue, and red/white blood cells are critically affected by poor methylation due to their higher demands.

Many environmental toxins are conjugated to a methyl group prior to excretion. Poor methylation effects this process, but most importantly, it leads to a decrease in the body’s glutathione levels. Glutathione is a highly sulfated protein, which is the major endogenous antioxidant.

As mentioned with heart disease, methylation is important for the production of CoQ10 and mitochondrial fatty acid oxidation, both of which lead to energy production within cells. When impaired, chronic illness such as fibromyalgia, chronic fatigue syndrome, and chronic pain syndromes may occur.

It is becoming more and more evident that methylation is one of the key forces behind the burgeoning science of epigenetics. This branch of science studies the manner in which our environment affects how our genes are expressed. Methylation is key in turning on genes that lead to good health, and also in turning off genes that lead to poor health.

Numerous mutations can occur within the cycle that lead to impaired conversion from the molecule homocysteine to methionine. The resultant increased levels of homocysteine have been demonstrated to be a significant risk factor for cardiovascular disease.

Furthermore, breakdowns within the cycle can also lead to decreased levels of CoQ10, a critical component of energy production on the cellular level. These decreased levels can also result in congestive heart failure and cardiovascular disease. Ironically, the statin drugs often prescribed to lower cholesterol levels have the unfortunate side effect of lowering the body’s levels of CoQ10.

Poor methylation, therefore, leads to poor regulatory control which often leads to the immune response being more dependent upon B cell activity. In this situation, overcompensation leads to the overproduction of antibodies in an attempt to overcome T cell deficiency.

Additionally, methylation of T cells themselves is required to prevent their decision to recognize our own tissues as foreign, thus leading to the production of autoantibodies. It is believed that it is the decreased methylation of CpG regions (locales within the DNA of the T cells with a cytosine base adjacent to a guanine base) that results in the shift from regulatory TH1 cells to the more indiscriminate and reactive TH2 cells.

With methylation support, this imbalance resolves, leading to a more appropriate and functional immune system. Another vital role played by methylation is the suppression of viral DNA, which has inserted itself into our own genome. When poor methylation occurs, the virus gains the ability to hijack the cell and begin its own replication process.

Myelination entails the coating of neurons with myelin basic proteins, which stabilize the neurons and enhance electrical signal transmission. Methylation of amino acids is key in the production of these proteins. Hence, impaired methylation can lead to demyelination disorders such as multiple sclerosis.

The methylation cycle is key in the transfer of the fat-soluble form of folate into the brain, as well as being key in the formation of the important neurotransmitters: epinephrine, norepinephrine, dopamine, serotonin, and melatonin. Clearly, any imbalances caused by an impaired methylation cycle can lead to anything from insomnia to depression, anxiety, etc.

Poor methylation, secondary to folate and B12 deficiency (or poor bioavailability), can result in neural tube defects, Down syndrome, and other birth defects. Moving forward, it is clear that obstetricians should be assessing their patients with regards to methylation, not just for the mother’s health, but that of the baby. They also gain predictive information regarding the child’s risk to vaccinations.

Nutrigenomics is the study of nutrients on gene expression. Ongoing research focuses on identifying and utilizing the molecular-level interaction between nutrients and the individual’s genome.

Nutrigenomics has alternatively been described by the influence of genetic variation on nutrients; the flip side of the coin. It does this by correlating gene abnormalities (or SNPs) with a nutrient’s absorption, metabolism, elimination, or biological effects. By doing so, nutrigenomics aims to develop a way to optimize nutrition with respect to an individual’s genotype. Using pharmaceutical grade supplements (called nutraceuticals), when indicated, can often unfreeze biochemical reactions and not only restore but enhance optimal health.

How is testing performed?

While by no means definitive, in an individual with a complex condition (such as autism, refractory mood problems, autoimmune conditions, and/or chronic disease), the information provided can guide our decisions to support the pathway using select nutraceuticals. As this field evolves, even more comprehensive and predictive tools will become available.